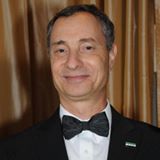 He started writing short stories and articles in his early years of elementary school and poetry in his college years.

He earned two BS degrees in Engineering and Literature from Damascus University.

After a number of encounters with the brutal Assad dictatorship regime, he decided that Syria was not a safe country to live in. He moved to the U.S. in the Eighties and restarted his life from scratch.

He organized 4 poetry recital events in Houston in the years 2009 and 2010, glorifying the civilization, history and culture of his nation. As soon as the Arab Spring revolutions started late 2010, he instantly moved to their side and documented them one after one and step by step with his writings.

His contribution to the Arab Spring includes publishing 2 books;

“A Journey around the Arab-Spring Revolutions” in 2015, and “The Chronicles of the Syrian Revolution” in 2017. But also writing hundreds of articles, organizing poetry recitals, giving lectures in colleges, and participating in a number of celebrations, national conferences and events where he was introduced as “The Poet of the Arab Revolutions”.

His latest book “Hearts, Tears & the Journey of Life” will take you closer than ever to the Middle Eastern view of Love, Death and Life. In one section, he is exchanging love words with pretty women who invaded his heart. In another one, he is shedding tears on beloved people who left forever. And in the last one, he is trying to find the truth behind the endless mysteries of life.

Follow him on Face-Book, You-Tube and Google: Tarif Youssef-Agha